For decades, archaeologists have observed and recorded prehistoric human activity among Mammoth remains, searching in particular for the earliest such activity in North America.

The “Miller Mammoth” became such a quest.

​ (Miller et al., 1988)
In December 1986, a nearly complete skeleton of an adult mammoth, Mammuthus meridionalis, was discovered in Anza-Borrego Desert State Park by a Paleontology class, led by Professor of Geology George J. Miller from Imperial Valley College, El Centro. The skeleton was found in situ (undisturbed, as it was originally buried) in late Pleistocene beds (the Pleistocene Epoch lasted from 2.6 million to 11,700 YBP or years before present). The excavation began without any expectation of finding evidence of early humans. However, discovery of a rib with parallel “V”-shaped cuts, located two and a half meters below the top of the Pleistocene beds, led to research into possible causes of these distinctive marks. 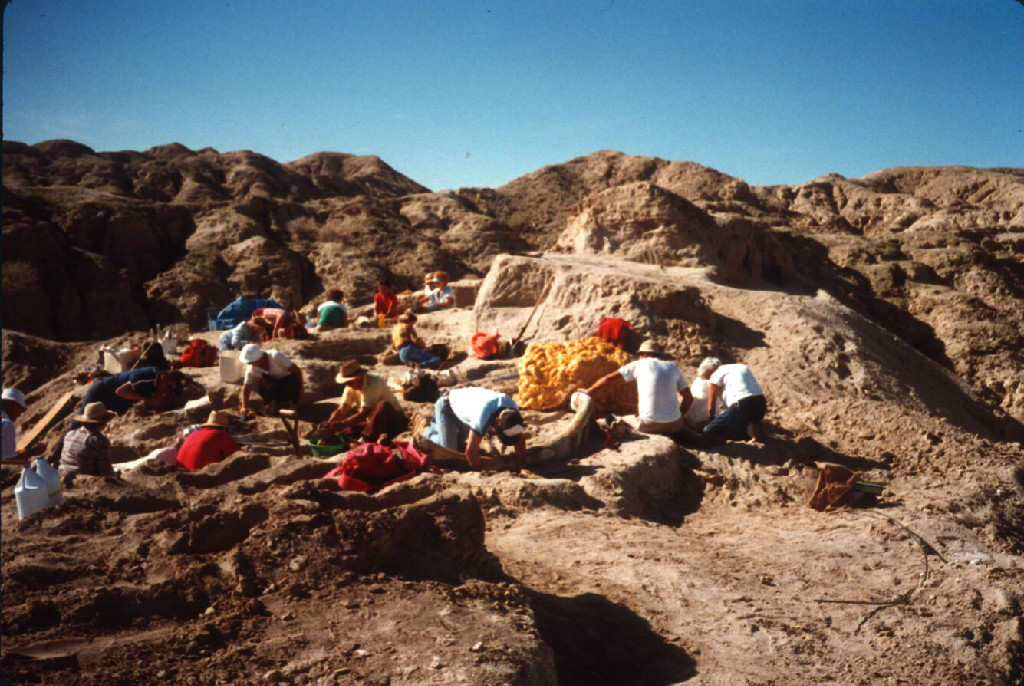 Members of the 1986 Paleontology Society at the site of the "Miller Mammoth", photograph from the Anza-Borrego Desert Paleontology Society archives
Markings on bone include; cuts, grooves, breakage, and other scars made by animals, roots, and natural weathering processes, plus intentional modification by humans for tools, ornaments, or other purposes. Professor Miller had previous experience studying marks on bones during several years working for the Los Angeles County Museum. During the recovery of this Mammoth, he observed five “V” shaped cut-marks on the inside surface of one of the ribs. The marks were not consistent with either weathering or natural scarring of the bone or accidental damage done by paleontologists during the site excavation. Miller and his team were unable to identify any carnivore that could have cut those sharp “V”s, leaving human modification as a distinct possible cause. 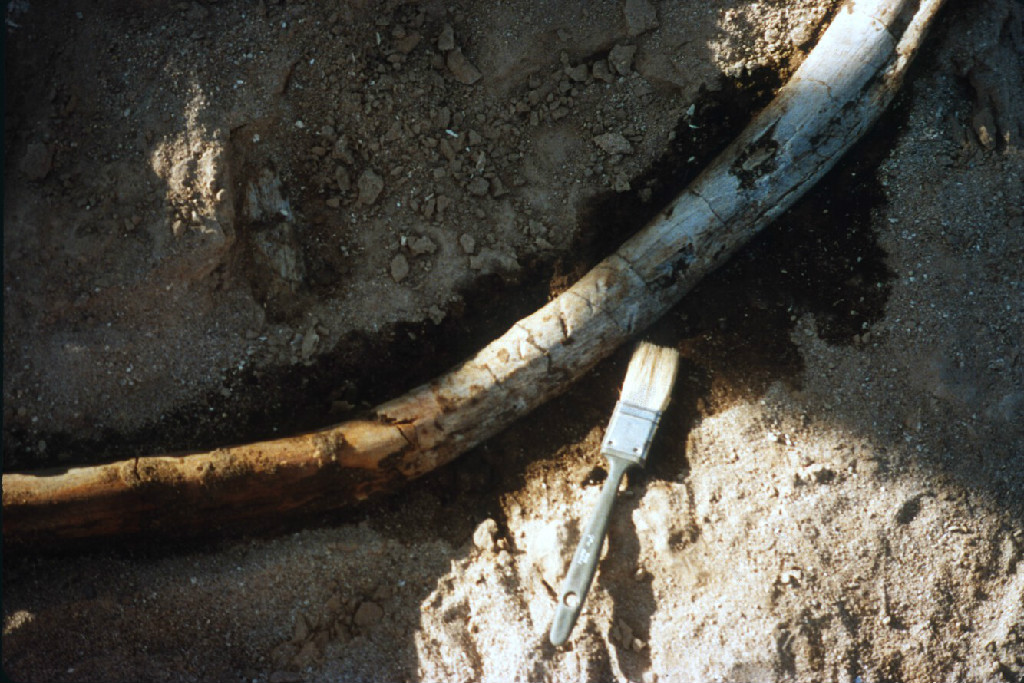 Distinctive "v" marks, photograph from the Anza-Borrego Desert Paleontology Society archives
The age of the site, about 500,000 YBP, was estimated by Miller’s team from a Uranium-Thorium date on bone samples of the mammoth (>300,000 YBP) and a magnetic polarity stratigraphy (paleomag) date of 720,000 YBP of a local sedimentary layer, plus supposed associations with a volcanic ash layer (>600,000 YBP) and other nearby fossils known from a particular time period (1.9 million YBP to 500,000 YBP). The team postulated that the marks were made by early human hunters, possibly Homo erectus, using the ribs as “chopping blocks,” with a primitive stone chopper or hand axe. This would place humans or their immediate ancestors at this site in North America nearly 500,000 years ago.
​ 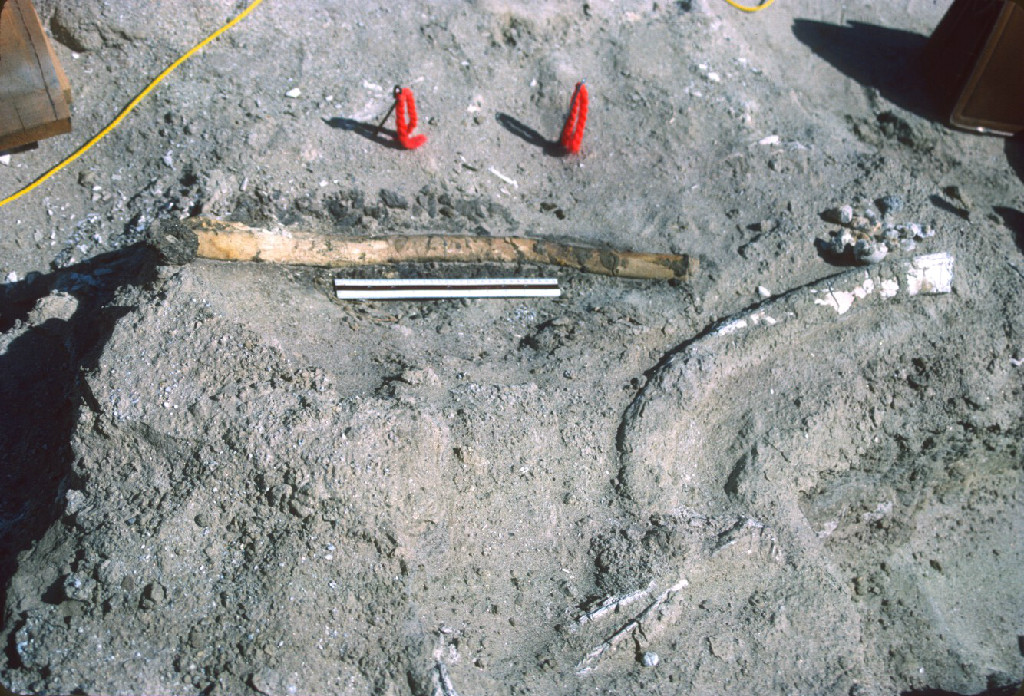 Ribs at the mammoth site, photogaph from Anza-Borrego Desert Paleontology Society archives
At the time of Miller’s research this date was considerably older than the earliest date for the arrival of humans into North America as accepted by the majority of Miller’s archaeological contemporaries. During the 1980s and 1990s most archaeologists agreed that the first Americans were the Clovis people who arrived in North America around 13,500 YBP. This paradigm is slowly changing with new archaeological discoveries and improved dating technology (see below). 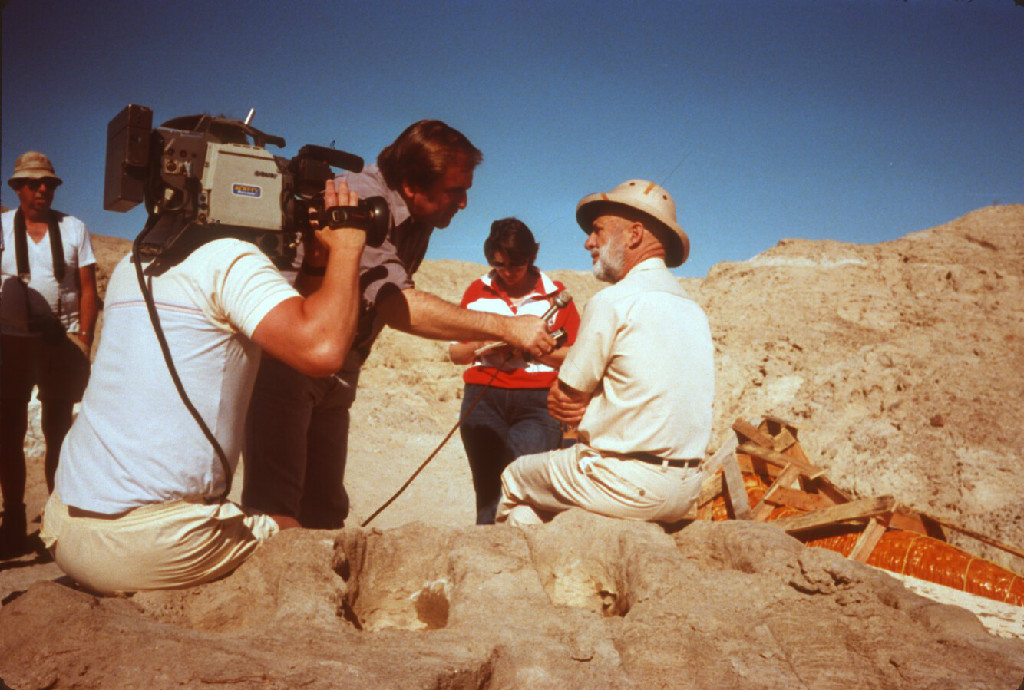 Prof. George J. Miller being interviewed at the site, photograph from the Anza-Borrego Desert Paleontology Society archives
Subsequently, the entire assemblage of preserved skeletal elements, including the rib in question was reviewed by George E. McDaniel and George T. Jefferson (1998:1). Their findings indicated that “the carcass had been heavily damaged by carnivores and scavengers,” and that the “marks on bones, previously reported as possibly made by stone tools, are a result of this activity”. Matrix was removed from the “V” shaped marks and their morphology was revealed in scanning electron microscope (SEM) studies. Those studies showed the “grooves are rounded “U” shaped marks and are typical of carnivore canine bite-and-glide tooth marks. 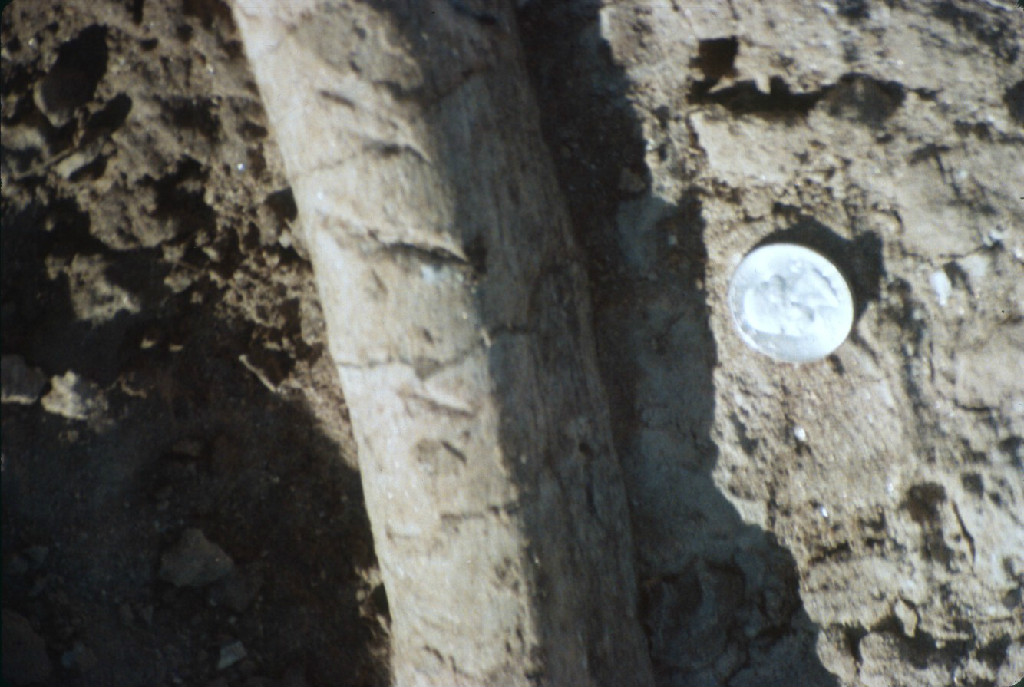 Close up view of the marks, photograph from the Anza-Borrego Desert Paleontology Society archives
A more recently discovered and geographically closer volcanic ash layer plus refinement of the local paleomagnetic stratigraphic dates, doubled the estimated age originally assigned to the mammoth site by the Miller team, to between 1.0 and 1.1 million YBP.

Still there are numerous sites where stone tools and mammoth remains have been found together – just not in Anza-Borrego. Examples include an underwater site in Florida where a 14,500 year old mastodon tusk was found, scarred by circular cuts from a knife and a 13,800 year old mastodon rib in Manis, WA  embedded with a projectile made of mammoth bone. The discovery in 2011, of human made tools and weapons, at the Debra L Friedkin site near Austin, Texas, has pushed the estimated date of human occupation of North America back to more than 15,500 YBP.

Over 80 localities producing proboscidean remains have been recorded in ABDSP – none, to date, has revealed indisputable evidence of human activity.
References: