This makes the Park one of the most productive proboscidean fossil areas in North America. Proboscidea is the order that includes mammoths and modern elephants.
​ 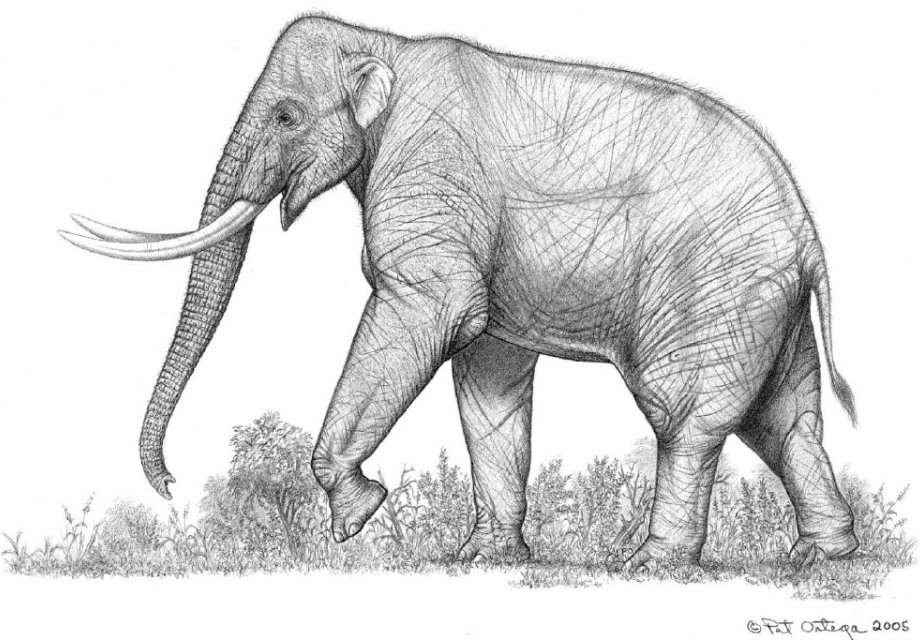 Mammuthus columbi drawing by Pat Ortega, Fossil Treasures of the Anza-Borrego Desert
​The proboscideans from ABDSP are represented by at least three separate groups, mammoths, mastodons and gomphotheres.

Mammoths were the largest of the proboscideans, resembling the Asian elephant but with larger tusks. A full-grown male of this extinct giant stood around 15 feet tall at the shoulder.

Mastodons were a distant relative, shorter in height, readily distinguished from mammoths by their teeth, which possessed a double row of large, distinct conical cusps for breaking up branches and leaves, as opposed to the flat, ridged, grinding teeth of mammoths, used primarily for grazing.

Gomphotheres had teeth similar to mastodons, although the cusps were not as distinct and separated. Regardless of the tooth similarity, Gomphotheres were more closely related to mammoths than mastodons 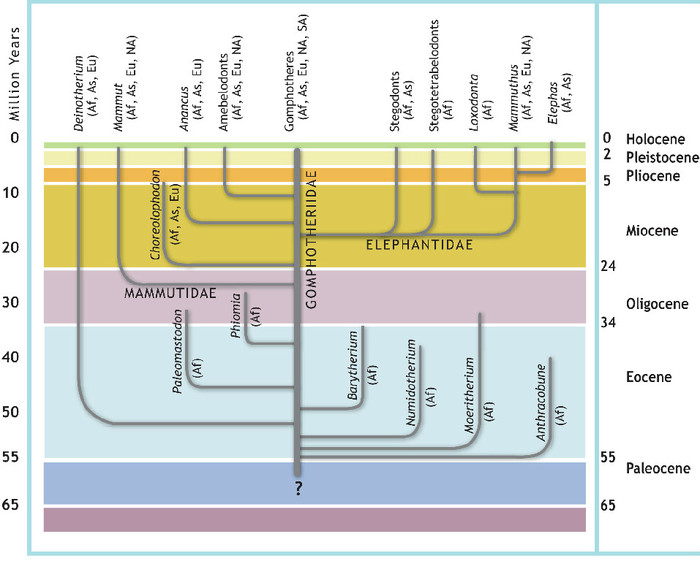 Simplified Family Tree of the Order Proboscidea Geologic epochs are on the right and age in millions of years marks the major branches. Geographic distribution of the proboscidea taxa: Af=Africa, As=Asia, Eu=Europe, NA= North America, SA=South America. Fossil Treasures of the Anza-Borrego Desert
Gomphothere remains in the Park date from about 9 million to about 1.4 million years ago.

Mastodon fossils are rare in the Park, but a tooth and a foot bone have been identified. Mammoths are the most readily identifiable and appear to be the most abundant fossil proboscidean in the Park.

Mammoths crossed the land bridge from Siberia and arrived in North America about 1.8 million years ago. The earliest mammoth fossil found in ABDSP is 1.42 million years old; the most recent is probably close to 100,000 years old. 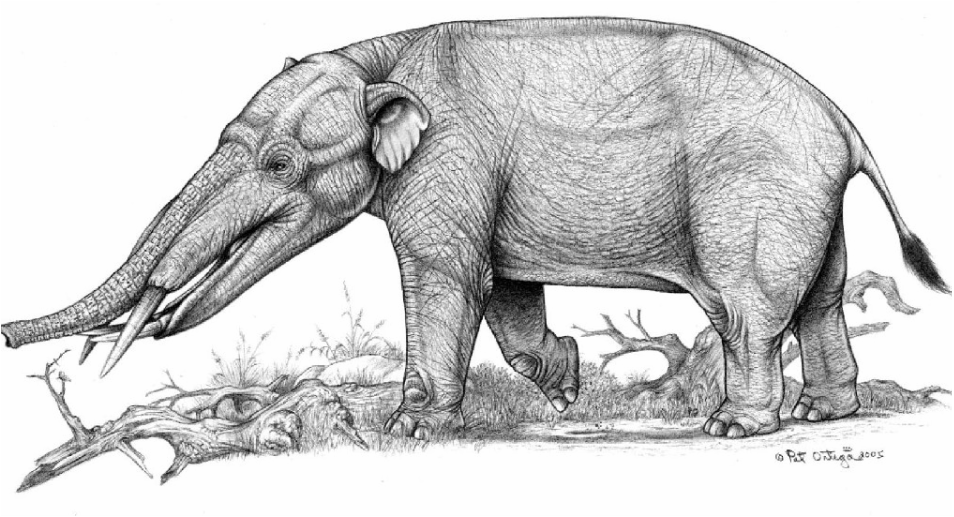 Gomphotherium drawing by Pat Ortega, Fossil Treasures of the Anza-Borrego Desert
The first ABDSP proboscidean was discovered on a cool January day in 1954 by Harley Garbani, a local, and ultimately world famous, amateur fossil hunter, and Dr. Ted Downs from the Los Angeles County Museum. Garbani and Downs found a large cusped tooth of the gomphothere Stegomastodon while visiting a spot in the Park referred to by Garbani as “Mastodon Station.”
​ 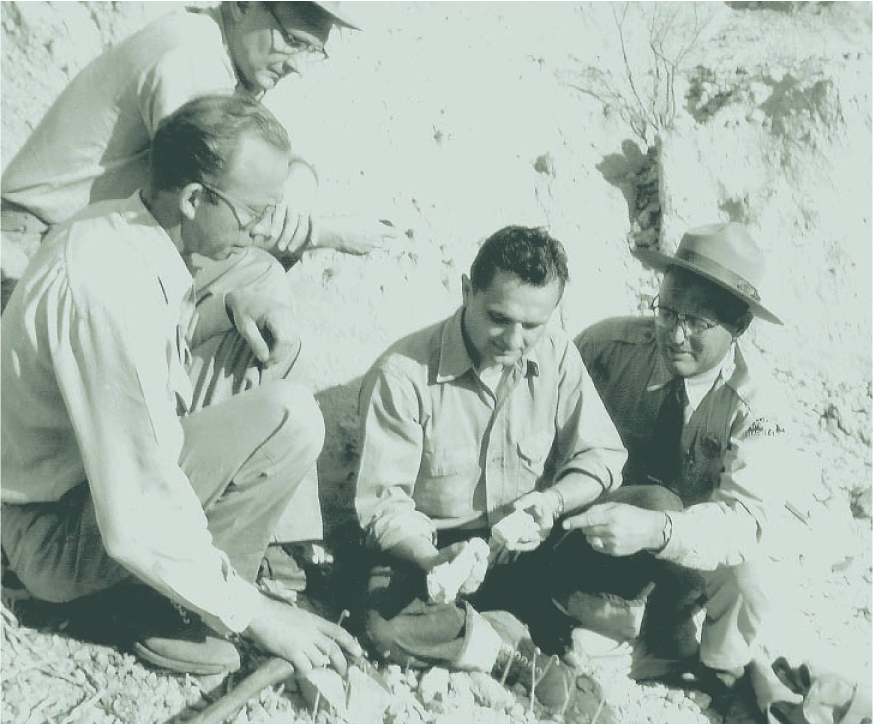 Dec. 1957, left to right is Dr. John A. White, Harley J. Garbani, Dr. Theodore Downs, and Park Ranger Dalton E. Merkel (photographs courtesy of the Natural History Museum of Los Angeles County)
Several sites have yielded partial mammoth skeletons. These tell us much about the living conditions and the environment in ancient Anza-Borrego.

Many of the specimens found are fragmentary due to the activity of scavengers and the harsh weathering conditions prior to original burial and subsequent damage by erosion of the sedimentary beds at the time of exposure of the fossils, just prior to discovery and collection. 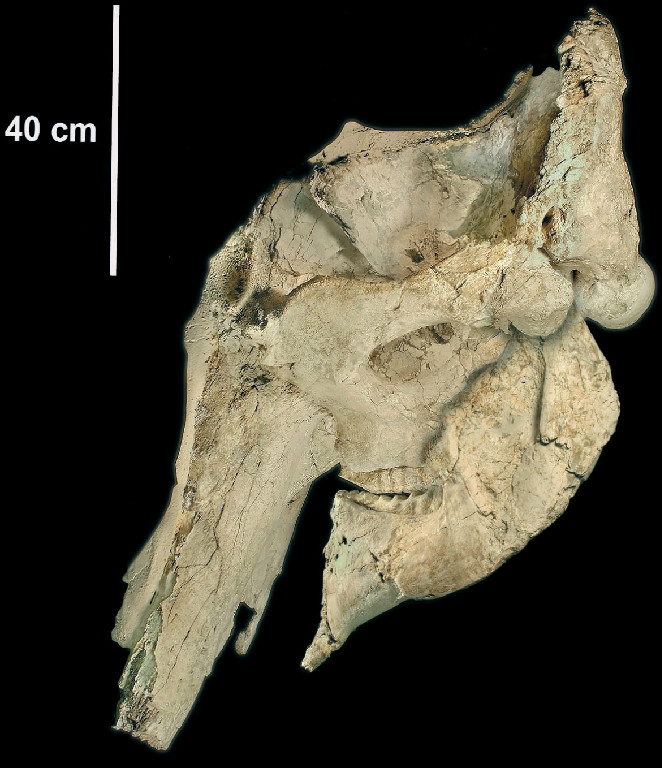 Skull of Mammuthus meridionalis Photo by Barbara Marrs from Fossil Treasures of the Anza-Borrego Desert
The most complete mammoth skeleton in the Park’s collection is the “Miller Mammoth.”

The skull and about 70% of the skeleton was discovered by George Miller of the Imperial Valley College Museum in December 1986.

The skeleton has been identified as a mature female southern mammoth known scientifically as “Mammuthus meridionalis.” She is considered to be approximately 1.1 million years old.

The skull of the Miller Mammoth is on display at the ABDSP Visitor Center.
​ 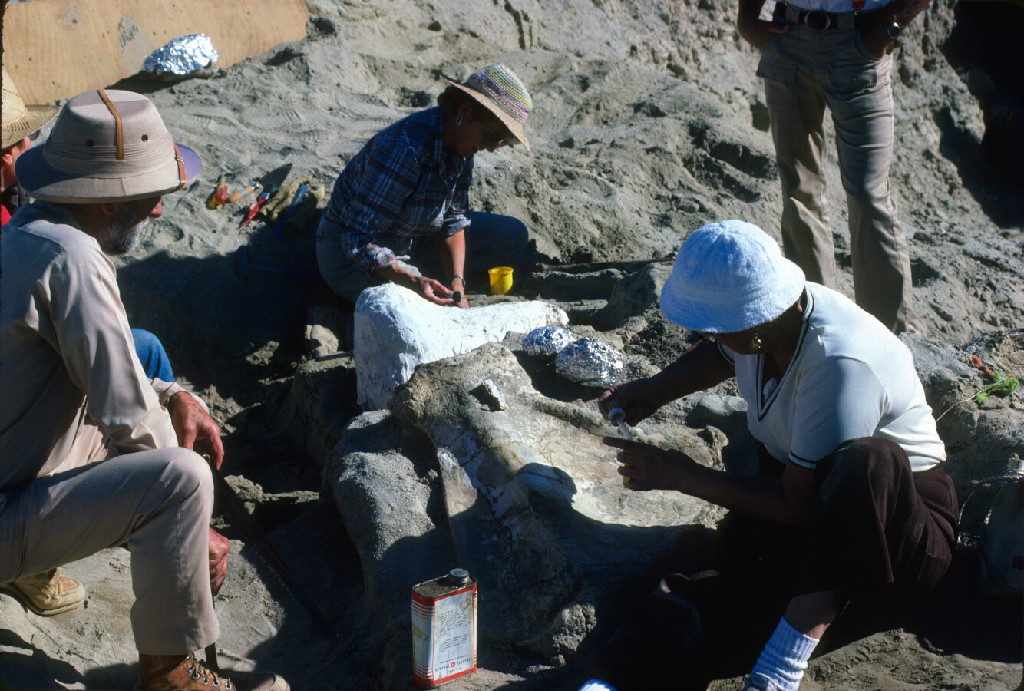 Prof. George Miller and volunteers at the Miller Mammoth site in 1988. Photograph from the Anza-Borrego Paleontology Society archives